DadsDinner.com - that's capital D twice, no space and no apostrophe - has featured in a number of publications and broadcasts, as listed below. I'm always happy to discuss further appearances (particularly if there's a fee!) as long as they don't involve exploiting my children and there's not too much sensationalism involved. Before you ask, though, I live in Edinburgh, I don't know many other housedads and my wife doesn't want her photo taken. It's also worth checking out the About Us section and the FAQ.

The daddy of all jobs! by Mark Howarth 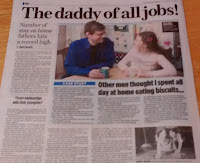 Guess what! Yes, that's right - someone's done a survey and discovered there are more housedads than there used to be. And, yes, despite there being (supposedly) housedads under every rock and shrub these days, I'm the one who got his picture in the paper... again. Oh, and then there's the small issue that I'm temporarily employed in a job that pays real money (not hugs and homemade sparkly necklaces) and thus I am not, technically speaking, actually a housedad at the moment...

Never mind. The article is pretty good really. There's a case study about me and lots of quotes from health psychologist, Cynthia McVey, who says sensible things about changing gender roles. The article makes a somewhat speculative link between the rise of housedads and changes to maternity law but it's not overplayed.

It's just a shame about the stock photo of a man in an apron scrubbing the floor...

The article is online.

With Fred MacAulay and Anna Miles

Since David Beckham is now at home looking after his kids, we had a discussion of what being a housedad actually entails. I got to pass on some useful advice and a bread-winning mum got to share her generally positive experience as well. Sounds like she has to take over most of the childcare duties as soon as she gets home from work, though, which is a shame. I don't think she realised I'm on duty evenings, weekends and at four in the morning, even when my wife's home. (Any time, any place, anywhere - if there's a whiny, ungrateful and slightly slimy child, I'll be there!)

Also, I got to sit a housedad exam live on air. Wasn't expecting that. Think I passed, though.

It was generally nice and relaxed and didn't feature the same old questions. Catch the iPlayer while you can.

The new life and times of him indoors by Peter Stanford 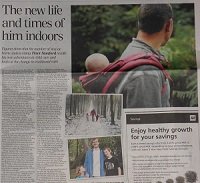 Another year, another bunch of statistics showing that the number of housedads is on the rise. At this rate, by 2037 everyone in the country will be a housedad (including the women). The article is written by a guy who's been a housedad for ten years and generally talks up the positive experiences of being a housedad. The official line that the housedad increase is down to male unemployment rising faster than female unemployment in the recession is pretty much disagreed with by everyone.

The article is online (but without the picture of me!)

A discussion of role-reversal. Could have gone a lot worse considering the female builder involved was asked about lesbians and I had to talk about my feminine side. Also features a very enthusiastic male midwife. 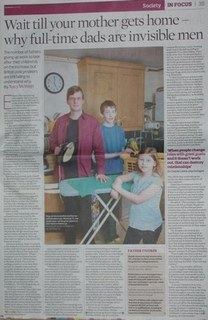 Yep - it's definitely that time of year. Two articles in a week about how you can't walk along the street without tripping over a housedad (allegedly). This one's a pretty sensible discussion, though. (They insisted I didn't smile in the photos!) The piece discusses some of the issues involved with role-reversal and suggests policy-makers have their head in the sand about the whole thing while society at large still promotes the mother=carer & father=provider stereotype.

Check out the article online.

We're glad to be stay at home dads by Karen Bale 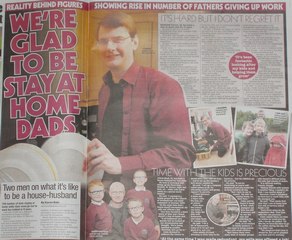 Hey! Did you know there are a lot more housedads than there used to be? No, really, there are.

It's clearly that time of year again when someone comes up with new statistics to show housedads are more common than colds. Reporters then email me because they can't find any others. Ho well.
Tne article is about the experiences that I and Colm Black from xplusy.co.uk have had as stay-at-home-dads. There are pictures of me doing the chores and they even got 'DadsDinner.com' right. Hooray!

Rise of the new housedads by Keith Kendrick

Telling-it-how-it-is account of housedad life mixed in with 'expert' opinions. Only a brief quote from me but plenty of comments from other parents as well.

The article is on Keith's blog.

A phone-in show looking at the pros and cons of role reversal. I was on last and the previous item about nuclear power overran so I barely got to say two sentences. Still, Keith from Reluctant Housedad said plenty of useful stuff for me.

(Oh, and I hope their nuclear expert got to lie down for a bit afterwards. He struggled on in a manfully scientific manner in the face of emotion and anecdote... Poor guy.)

Father's Day is fast approaching, so it must be time for a feature on the changing role of dads, once again.

The article discusses a recent survey which suggests that dads are now doing an average of 53 hours of chores and childcare a week. This seems rather unlikely, to be honest, but there's some good stuff on how dads are much more involved with their children than in previous generations but aren't entirely confident about it due to a lack of role models. (There's also lots about DadsDinner!)

The article has been made available to 130 local newspapers but I have no idea how many have taken it up. If you've seen it in the wild, feel free to let me know.

Update: Found it in The Irish News!

An earnest look at the changing face of fatherhood, involving the head of the Fatherhood Institute, a guy from Theladders.co.uk who finds jobs for people earning 50K+ and er... me. Even though I didn't get in any good vomit stories, I lowered the tone somewhat. Ho well, it was good experience and it got broadcast in Surrey so no one I know will ever hear it unless someone inadvertently slips them the iPlayer link. 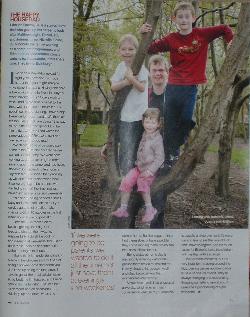 When daddy is a domestic god by Jane Phillimore

Profiles of four fathers who have 'all stepped up to the mark to take on the role of primary carer'.

There's a section about my experiences as a housedad. It seems slightly odd to me because it's phrased in the first person but it wasn't written by me. It's not bad, though, and the title The Happy Housedad sounds like a good name for a pub. (I'd drink there...)

The article also contains the stories of a single dad, a stepdad and a widowed dad. They've all had a much harder time of it than me! There's not much comment from the writer - this is a Father's Day piece to illustrate that men can cope with kids too. I'm not sure I'd really consider myself 'exceptional', however. I'm in the same boat as a whole crowd of housemums.

Welcome to any Mail on Sunday readers who've made it here.

At last, mention of myself and JK Rowling in the same article. Unfortunately, it's about how more UK men than before are letting their partners do all the work while they put their feet up. I did my best to add a little balance but the related editorial slagged stay-at-home men for watching Richard & Judy all day.

Oh, and the online comments are pretty scary, too.

We can work it out by Anita Chaudhuri

'From house husbands to alpha females, how are men and women adjusting to so much change?'
Psychologies is a glossy, up-market women's magazine and really isn't my normal kind of reading material (honest!) but the article is a lot more sensible than the subtitle might suggest. It focuses on communication, expectations and the emotional side of things rather than the more mundane 'make sure you buy a high enough buggy' stuff you get round here. Worth sneaking a look at if the mag's lying around the next time you're at the dentist. (It's the issue with what's-her-name from Will & Grace on the front).

Blink and you'll miss the DadsDinner reference, so kudos to anyone who's followed it here. Make yourselves at home. 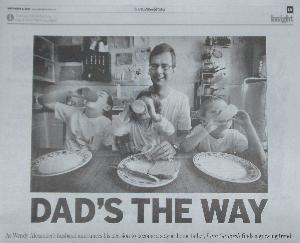 Dad's the Way by Dani Garavelli

This article about housedads is a response to the partner of Wendy Alexander (leader of the Scottish Labour Party) cutting back his hours in order to take on the care of their young twins. Since they have a nanny, he's still going to be part-time and he's approaching retirement age, it's all a little bit of a stretch, but good luck to him, anyway. I suspect he'll be busy.

Most of the piece recounts the trials and tribulations of various housedads. It's informative and there's some useful advice. Worth a look.

Welcome to any Scotland on Sunday readers who've come this way. 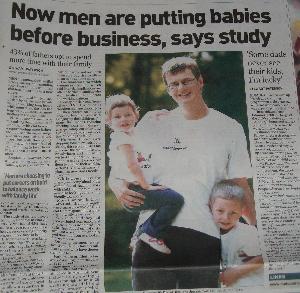 Now men are putting babies before business by Stewart Paterson

Isn't that just the way? You wait months for some major publicity and then get two lots in the space of a week. (A week in which your house is full of giant air-blowers that are steadily driving you insane, I might add).

The article is mainly regurgitating some stats about more dads taking an active role in raising their children.

Welcome to all you Herald readers. No fighting with the Guardian readers.

Special thanks to Families Need Fathers for setting up the interview.

The Paternal Instinct by Blake Morrison

Hot on the heels of a write-up in The Leith Gazette, DadsDinner.com gets some coverage in the national press in this very sensible article about stay at home dads. A version is available online at Guardian Unlimited. Shame the link to DadsDinner is broken but well done to all those who made it here anyway. Welcome!

Home
The best of @DadsDinner

Enjoying this site? Then consider making a donation to Tearfund. 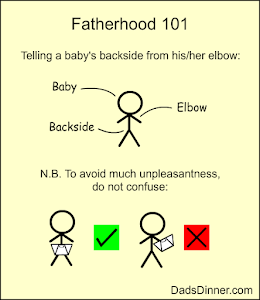 Tips for housedads
(and other parents) 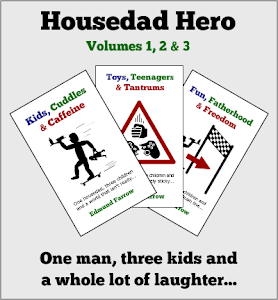 The Edge of the Otherworld